The Story of Kevin
Kevin was raised on the outskirts of Erie, PA, Springfield, MA, Buffalo, NY and Chicago, Il. It was not until puberty that he began to wonder where he might have access to the inskirts of such places, and by then, of course, it was too late.
Kevin got his start in music at the age of 14 after hearing Eric Clapton play on his older brother's—Kevin’s, not Clapton’s--Wheels of Fire album by Cream. It was a life-defining moment. “This,” Kevin decided, “is what I want to be!” And if, at that instant, it occurred to him that he didn’t know how to play the guitar, it was just as well, because he didn’t own one anyway.
He then set about obtaining a guitar—and a teacher. In fact, he obtained 48 guitar teachers, none of whom thought he knew anything, and none of whom thought he knew anything. Everyone was right. It was a perfect match. Finally, after ostensibly learning something, Kevin paid his dues: he joined several garage bands, spent six years teaching punk kids how to play a lousy C scale, performed in several mall shows and club dates, and became a proud, if embarrassed, member of what was probably the worst wedding band on the south side of Chicago, playing the worst versions of the worst songs for the worst brides and grooms and their terrible, terrible bridesmaids and groomsmen and all their relatives and friends, all of whom were the worst.
Small wonder, then, that in the fullness of time Kevin decided, “the heck with this,” and embarked on a different path, ignoring music for about a decade as he pursued the art of, well, art.
After leaving the prestigious American Academy of Art in Chicago in 1986, Kevin entered the occasionally-fast-, but usually-unbearably-slow, paced world of hand-drawn animation, a world in which animation is actually drawn by men’s hands. Here he spent the next 20 years, working at some of the most prestigious animation studios in the world including that of Don Bluth, Walt Disney, Warner Brothers, and Cartoon Network. Although you wouldn’t know it to look at him, he has worked on some very well-known movies, such as All Dogs Go To Heaven, Hercules, Mulan, The Iron Giant, and the Tigger movie entitled The Tigger Movie.
After the big animation crash of '01 (which of us can forget where we were that fateful day, the Day Animation Crashed?) Kevin hit the woodshed. It was there, amid the logs and the wood chips and the sawdust, the Elmer’s glue and the furniture and the unpleasantly-named “tung oil,” that he resumed his study of the guitar. He also, perhaps because it was so convenient, learned how to make wood furniture.
Suddenly, years later, he emerged--much to his wife's surprise, who wondered where he had been all this time, and much to his surprise, when it dawned on him that he was married. He had become a much better guitar player, and a not too bad furniture maker. 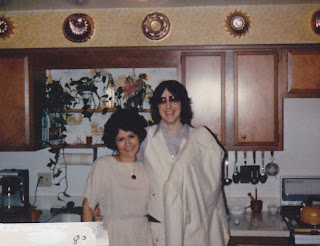 Fate, in the form of a guy named Bryan, called one day—and, for once, Kevin took the call. He was introduced to the members of what is now Don't Tell Betsy, and he hasn't looked back. Now he has a grand time making music with a bunch of very nice people.
By day, Kevin does special effects animation for the same studios where he was once employed full-time. He spends what maybe laughingly called his “spare time” with his kids, his old house, his old car, and the same wife. He has nothing new.
And he is untroubled by the demands of fame and glamour. Touchingly, he's been drawing for animated cartoon movies for nearly 25 years, and still can't figure out why nobody recognizes him.
You can find out where he does what he does and who he did it for, here --
Check out Kevin's photoshopping on the Artistry Whiz posts.

Here is Kevin at Jim Morrison's grave. Apparently, it was his anniversary and he needed some flowers to give the Missus.

Me at my 7th birthday - I don't think I got my 2 front teeth for my birthday either. Dig that bow tie. I was destined for animation. Chuck Jones wore a bow tie and when he died, he had fewer teeth than I had in this picture.