Ellis Weiner, our drummer, moonlights as a humorist, in books written both solo and with
his wife, Barbara Davilman. The more noteworthy include these: 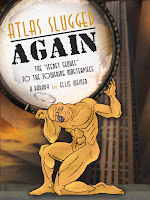 And his latest, Atlas Shrugged AGAIN: This is, supposedly, the "secret sequel" to Atlas Slugged, the monumental best seller by Annyn Rant. Written in 1968 (ten years after the original), it was suppressed by its publisher, and ultimately by Rant herself, because one of its main characters was thought to be too obviously based on a person from real life, who would sue the publisher and the author, and win.

- The first Pete Ingalls book.  Ingalls is--or, rather, thinks he is--a private eye.  He's actually a bookstore clerk who got hit on the head with a box of books.  Now he's soliciting clients and solving--or, rather, thinks he's solving--cases.  Actually it's his secretary who solves them.  Out of print BUT COMING BACK SOON as an "enhanced" e-book.  Watch this space.

The Big Boat to Bye-Bye

- The sequel to Drop Dead, My Lovely.  Ingalls again, as wrong as ever.  This time the case involves a naughty blackmail video of, uh, puppets saying and doing bad things.  Stephanie Constantino, Ingalls's gal Friday, solves it again.  Out of print but findable on Amazon and Ebay, probably.

The Joy of Worry

Yiddish with Dick and Jane

- The classic best seller.  Dick and Jane are all grown up, with spouses and kids of their own.  Then Mother has a heart attack and sister Sally--who, unlike everyone else, has been able to escape to live in the real world--arrives to help.  Everybody, for some reason, speaks Yiddish, which is explained in the Glossary in the back.  Lessons are learned, hearts are warmed, and a real estate agent is revealed to be gay.

How to Raise a Jewish Dog

- "by the Rabbis of the Boca Raton Theological Seminary" (i.e., by Ellis Weiner and Barbara Davilman).  Quite possibly the funniest book ever written.  Certainly the funniest book ever written about to raise your dog "as we were raised, as Jewish children."  Photos, tables, and
an unforgettable chart explaining custom-created mixed-breed dogs you may not have heard of.

How to Profit From the Coming Rapture: Getting Ahead When You're Left Behind

- Yes, Jesus will return any day now, to Rapture the faithful up to Heaven and leave the rest of us behind for seven years of hell on earth in what is called The Tribulation.  Where should you put your money during the End Times?  What should you invest in,
when should you get into real estate in Israel (and when should you get the hell out), and what's the deal with the Antichrist?  It's all here.

Arffirmations: Meditations for Your Dog

- Self-affirming, soul-nourishing positive sentiments to read to your dog, or let him/her read them him/herself.  E.g., I AM A SPLENDID AND SUPERB ALPHA AND IT IS OKAY IF I DESTROY CERTAIN PARTS OF YOUR LAWN ("As an alpha dog, I am fully committed to my responsibility to pee on certain areas of grass or bushes in reply to the pees of previous dogs...")

The Big Jewish Book for Jews: Everything You Need to Know to Be a Really Jewish Jew

- Our latest. Why? Because American Jews have become so assimilated, so fabulous, and so Americanized, they've forgotten and lost sight of The Old Ways. Meaning, the ways Jews lived in a) the Late Bronze Age, and b) around 1956. Thus, there are chapters on How to Use the Old Testament to Tell If Your Wife is Unfaithful, but also on How Not to Accept the First Table You're Show to at a Restaurant. There is How to Build an Ark, but also How to Prepare and Serve Too Much Food. Profusely illustrated and a total scream.


Go to http://www.ellisweiner.com/ for more thrills than one can even imagine!

And check out Ellis's Writing: check out his work from the Huffington Post. His RSS feed showing his five most recent articles can be found under Check Out Our Drummer's Scribbles on the left column of the Don't Tell Betsy! website.

Also, browse his books on his Amazon Author Page.