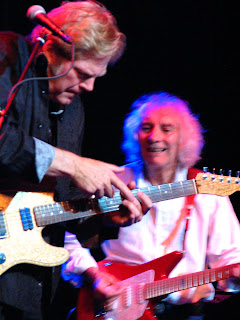 The other night I had the extreme pleasure of seeing guitar greats, Albert Lee and John Jorgenson at the Canyon Club in Agoura, CA. Nice venue if not just a tad outdated decor wise. But I mean that in a good way. It's not a hip Hollywood joint, with stainless steel or lots of neon lights and really loud thumping unbearable music. It's like a small House Of Blues, without all the pretentiousness and cost. In fact, during the dinner hours before the band actually took the stage, the music out of the house system was perfect. Nice selection of tunes and not loud! They had the good notion to keep the volume down so you could actually converse. What a concept. Lots of seating, in fairly comfy chairs, at tables, or a few couches scattered here and there. The three of us had a table just a bit left of stage about 10 -12 feet from the stage. We had dinner which was a little pricey, but from what I read about the joint the owner is good to his acts and he makes his money on food and drinks to keep the ticket prices down. These were only $20, so that in itself isn't too bad these days. I paid a ton more to see Clapton at the Hollywood Bowl, so this my friends, was a bargain and a half. I recommend the place to see anyone.
The food wasn't bad, as I opted for the cheapest meal on their menu. The beers at $7 for a Newcastle was a bit high, but the salad was fresh and nice greens and pretty good bleu cheese dressing, potato was good too, so overall it was a good night and great music. I will be returning soon I hope. I saw that Robben Ford is playing next month. The Canyon Club features a lot of great acts and I don't have to trek to Hollywood or somewhere and pay exorbitant parking rates. Plenty of free parking, and if you get there early you can check out all the antique stores in the little plaza next door to the Canyon Club.
What can I say about Albert, he's the guitarist's guitarist. Eric Clapton says he's his favorite guitarist. He's played with everyone from the Everly's to Emmylou Harris' Hot Band to Eric Clapton to every country Nashville player, like Vince Gill, Brad Paisley, Danny Gatton and Brent Mason. He's even tours with Bill Wyman's Rhythm Kings.
When Albert and John took to the stage, which was rounded out by very good musicians - Jeff Ross on keyboards, Lance Hoppen on bass, and Jason Smith on drums, they opened up with a rousing rendition of Dave Edmunds' 'Sweet Little Lisa', to which Albert and John got their respective licks in. Great opener. They went onto play 'Big Hunka Love' by Elvis, 'Mystery Girl', a nice Orbison tune, and ended the opening set with Gram Parsons' 'Luxury Liner'. 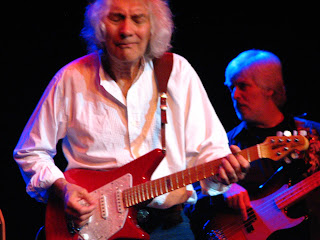 Albert then left the stage, and John Jorgenson stayed out, and for those of you not familiar with him, he was a member of the Desert Rose Band, The Hellecasters and Elton John's band just to name a few of the people he's played with. Plus he's got his own Gypsy Jazz band in the style of Django Reinhardt which he really does justice to. He's an amazing guitarist, and a really nice guy to boot. He opened with a great rendition of George Harrison's 'Love You To', and was coaxing some really nice sitar sounds out of his Strat. He went on to play 'If It Be Your Will' and ended with his own tune 'Back On Terra Firma' from the first Hellecasters album. 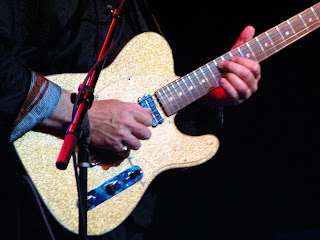 Albert came out again and played up on an old Buddy Holly tune, 'Rock Around With Ollie Vee', Little Feat's 'Rad Gumbo' - a fav of his he plays a lot that I've seen online. Albert then brought out his daughter, Alexandra to sing 'She' by Gram Parsons. Really nice change of pace and a nice song, and she has a terrific voice. He ended his little set with Ray Charles' 'Leave My Woman Alone'.
Again, another little set of just Albert on piano and John on acoustic guitar, singing and playing 'Devoted To You' by the Everly's and 'Til I Gain Control Again' by Rodney Crowell.

The rest of the band then joined them for the last set, which included Albert's band Hogan's Heroes own 'Tear It Up', 'Well Alright' again by Holly, 'Evangelina', a nice Hoyt Axton tune and ended with Albert's most well known tune, 'Country Boy', which he wrote some forty years ago, and it gets better everytime I hear it. Both Albert and John had extended solos in this one joined on this by guest violinist Scarlet Rivera, whom some of you might know from Bob Dylan's Rolling Thunder Revue. It was like a rockabilly heaven hearing these two play. For the encore they did a long wicked version of 'Orange Blossom Special', sort of in the vein the Hellecasters did on their first album.
If you ever get a chance to see these two in action, do so, you won't be disappointed, especially if you are a fan of this type of music or are just a guitar player. I still don't believe my guitar has as many notes on the neck as Albert's or John's, but I'll keep searching for them. And many thanks to John Jorgenson for the set list.
You can and should visit these fine guitarists on their own sites -
John Jorgenson
Albert Lee & Hogan's Heroes
Want to learn some new guitar licks, or just listen to some great playing check these out.
Albert Lee with Hogan's Heroes and his newest solo album.


John Jorgenson's latest and in my opinion, the best Hellecasters album. Buy Today!
Posted by Kevin at 1:27 PM 2 comments

Hi everyone. Radio Vickers, which used to be hosted by this site, has moved to a NEW LOCATION of it's own. All of the old posts have been transferred over. Come visit RadioVickers.blogspot.com!
Posted by Don't Tell Betsy! at 11:20 PM 0 comments